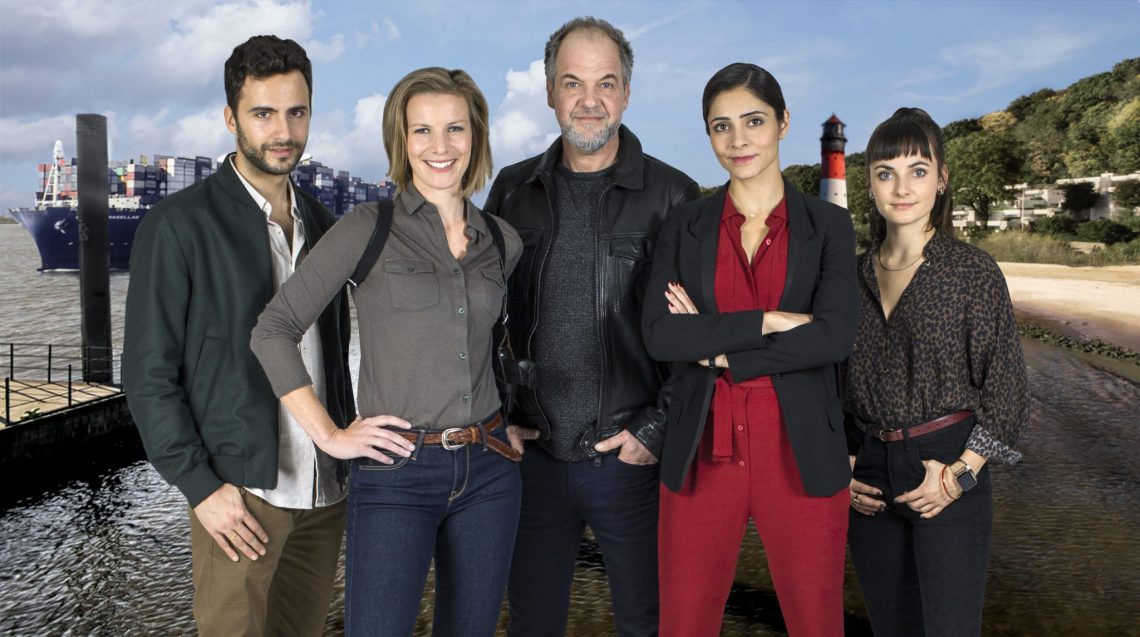 The Elbe is the connecting element between Hamburg, Schleswig-Holstein and Lower Saxony and offers the three-country SOKO a variety of locations and cases, ranging from St. Pauli to the port of Hamburg, the Alte Land to Dithmarschen. Therefore, the commissioner’s office of “SOKO Hamburg” is located on the outskirts of the city directly on the Elbe. From there, the commissioners can also reach many locations by boat.

Sven Nagel, Esther Bialas and others direct the scripts by Meriko Gehrmann, Etienne Heimann, Niels Holle, Frederik König, Jakob Schreier, Katja Töner, Miko Zeuschner and others. It is produced by Network Movie Film- und Fernsehproduktion, Jutta Lieck-Klenke, Hamburg. Peter Jännert and Silvia Lambri are the ZDF editors in charge. Filming will last until early September 2020, and broadcast dates have not yet been set.

In the second season, which aired until the end of 2019, the team of investigators solved murder cases and other crimes in ten episodes across the states of Schleswig-Holstein, Hamburg and Lower Saxony.

SOKO Hamburg is housed on the edge of the harbor in an old brick building directly on the river – between the city and the countryside, with a view of the passing ships. But the Elbe leads the investigators not only to St. Pauli, to the harbor or to the posh villas on the Elbchaussee, but also to the orchards downstream in the Alte Land or to Dithmarschen. In order to quickly reach these scattered locations along the Elbe, the investigators also have a speedboat at their disposal, which gives SOKO Hamburg an additional dynamic.

SOKO Hamburg’s reference is the water and the people who live along the river and are involved in crimes or busy solving them. From their precinct, the investigators always have a transparent view of what makes Hamburg and connects all its districts and milieus. And, of course, also of crime. City, country, river with a difference: big-city flair, local color and country life all staged in a modern way. Stimulating, entertaining and down-to-earth. That is the diversity of the cases in this three-country SOKO.

Sarah Khan (Pegah Ferydoni) – The first chief detective and head of SOKO Hamburg impresses with her self-confident appearance, outstanding quick-wittedness and an indomitable will. She is well connected in Hamburg’s high society and can achieve a lot on short official channels.

Oskar Schütz (Marek Erhardt) – Chief Detective Oskar Schütz – divorced and father of a 16-year-old daughter – is the leading wolf and the good soul of the SOKO. He is pithy, correct and straightforward – the most experienced police officer in the commissioner’s office, even if time has passed him by a bit. An absolute “instinct cop” and an unconventional loner who sometimes goes on a manhunt alone.

Lena Testorp (Anna von Haebler) – Detective Chief Inspector Lena Testorp – single, no children – has keen powers of observation, is intelligent, ambitious and empathetic. She has developed into a kind of emotional Sherlock Holmes in the police service and can put herself in the shoes of almost anyone.

Max Nordmann (Garry Fischmann) – Detective Superintendent Max Nordmann is a happy father of a four-year-old son and a passionate police officer. This is not always easy to reconcile and sometimes causes stress at the police station.

Franzi Berger (Paula Schramm) – Detective Inspector and IT expert Franzi Berger is fresh out of police school, sees herself as a hacker and is the cheeky and nerdy computer and technology genius in the team.

The episodes of the 2nd season SOKO Hamburg

Captain Andreas Haber is shot during his loudspeaker announcement at the ship welcoming facility “Willkomm Höft”. The SOKO Hamburg investigates. Does the murder have anything to do with the ship collision in a Brazilian port, for which Haber is to testify before the International Tribunal for the Law of the Sea? After all, millions are at stake. But Haber’s first officer puts the investigators on a different track. A young Brazilian woman seems to have something to do with the murder. Did she try to blackmail the captain? But why would she shoot the man? Did Andreas Haber threaten the police? Or is it a matter of jealousy? Only when the investigators of SOKO Hamburg take a closer look at the dead man’s lawyer do they realize who the real murderer is.

Shortly after stable boy Torben Linsler is found dead at a riding stable in Schleswig-Holstein, the expensive show jumper Antigone also lies dead in his stall. For the owner of the riding stable, Rainer Gerhardt, Antigone’s death is a financial disaster; after all, he could have paid off his debts with the sale of the horse. But Jolie, his daughter Hannah’s best friend, also wanted the animal desperately, and her father was on the verge of buying the horse.

When the horse is found to have been poisoned and similar marks are found on the hands of the corpse, it is clear that the deaths are connected. Did Rainer Gerhardt want to commit an insurance fraud that Torben thwarted? Or does rival riding stable owner Silke Schreiber have something to do with it?

The corpse of the popular German teacher Dückers lies naked and badly battered in a wooded area on the outskirts of Hamburg. What happened, and how did he get there? Neither his ex-wife nor his colleagues or students, including Oskar’s daughter Paula, have an explanation. There have been rumors about Dückers at his former school. Might he have been more attracted to some of his students than allowed? Investigators find out that the background to his death is far more tragic than thought.

Management consultant Tobias Körner is found dead in the underground parking garage of a luxury hotel. A telephone number leads the investigators on the trail of Agnes Meyer, a young woman who spent a night with the victim. All of a sudden, Agnes shows up at Körner’s tailor Ritter as a new apprentice. Apparently she not only had a close relationship with Körner, but also with the senior boss of the traditional tailor’s shop. Was the old man jealous of his regular customer and therefore killed him? Or did Ritter’s daughter-in-law Charlotte have something to do with Körner’s death? The investigation eventually leads in a different direction when a family secret of the Ritters comes to light.

Permanent camper Horst Wemmer wants to buy his sweetheart, an escort lady, a classic car from his lottery winnings. However, he dies before he can do so. Oskar decides without further ado to spend his vacation at the campsite. He investigates undercover on site, feels the campsite owner on the tooth, brings interesting things about Horst’s girlfriend and his son to light and can thus support the investigations of his colleagues Lena and Max from the outside.

In Gödelsdorf, Lower Saxony, the mayor and horse dealer Joseph Maack is found dead. At first, everything points to a robbery-murder. Then it turns out that the man had been in trouble with an environmental organization called “The Howling Wolves”. While Oskar cuts his teeth on the leader of this organization, the shepherdess Verena Berger, Lena gets closer to the victim’s wife. Then a former jockey turns up, with whom the victim may have committed betting fraud in the past. Is he the killer? SOKO investigates a quagmire of love and lost dreams.

Tamme Althuss is discovered dead in the dock of a Hamburg marina. He ran the organization “Afrika-Hilfe Hamburg” and spent most of the year in Sierra Leone. He sailed to Hamburg with his yacht only for a few weeks at a time to keep donors informed about aid projects. When it comes out that the dead man had an affair with the operator of the harbor restaurant, her husband Lothar Meerpohl comes under suspicion. Was it a crime of jealousy?

Activist Bjarne Zellner is pulled dead from the Elbe River barely two months after he was last seen alive. His body shows traces of an applied shot to the abdomen. The SOKO starts investigating and soon becomes part of it itself. Zellner had taken part in the May riots in Hamburg’s Schanze district immediately before his disappearance. Could a shot have been fired from a police weapon on the night of the demonstration?

When investigators target the owner of the squat and find out that he gave money to a friend of the victim to get Zellner out of the apartment, a murder for hire is suddenly on the cards.

During a private restaurant visit, Lena is approached by a homeless woman. On their way back home, she and her companion find the woman’s body lying on trash bags. She was pierced by a pointed heating pipe protruding from the bags. A tragic accident under the influence of alcohol? The investigation by the SOKO is initially difficult, because the dead woman cannot be identified. Only when Franzi tracks down her sister does the true drama of this death gradually become apparent.

Marine biologist Heiner Lübbers is killed by the explosion of an air compressor in his shed. Is Tanja Lorenz, CEO of the Hamburg terminal operators and leader of the Elbe deepening advocates, behind it? Heiner Lübbers has been collecting samples during his dives in the Elbe to prove that the upcoming deepening of the Elbe would dangerously disrupt the ecosystem. At the same time, investigators learn that the marine biologist had an affair with his father’s second wife. The latter might have acted out of jealousy. But would the man really be capable of killing his own son? A third clue emerges when the investigators find out that Heiner was not actually diving for samples at all, but was on a treasure hunt. Was it a murder of greed? 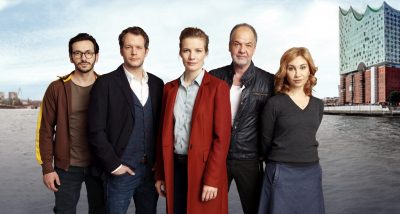 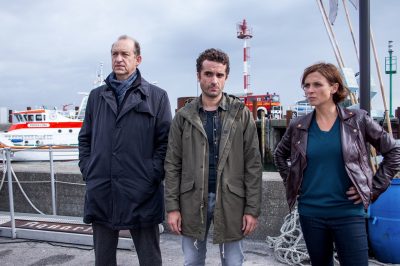